Warning. Cloning this item will not retain its parent-child relationship.

Tools
DownloadAdd to My CollectionContact us about thisCitation for this item 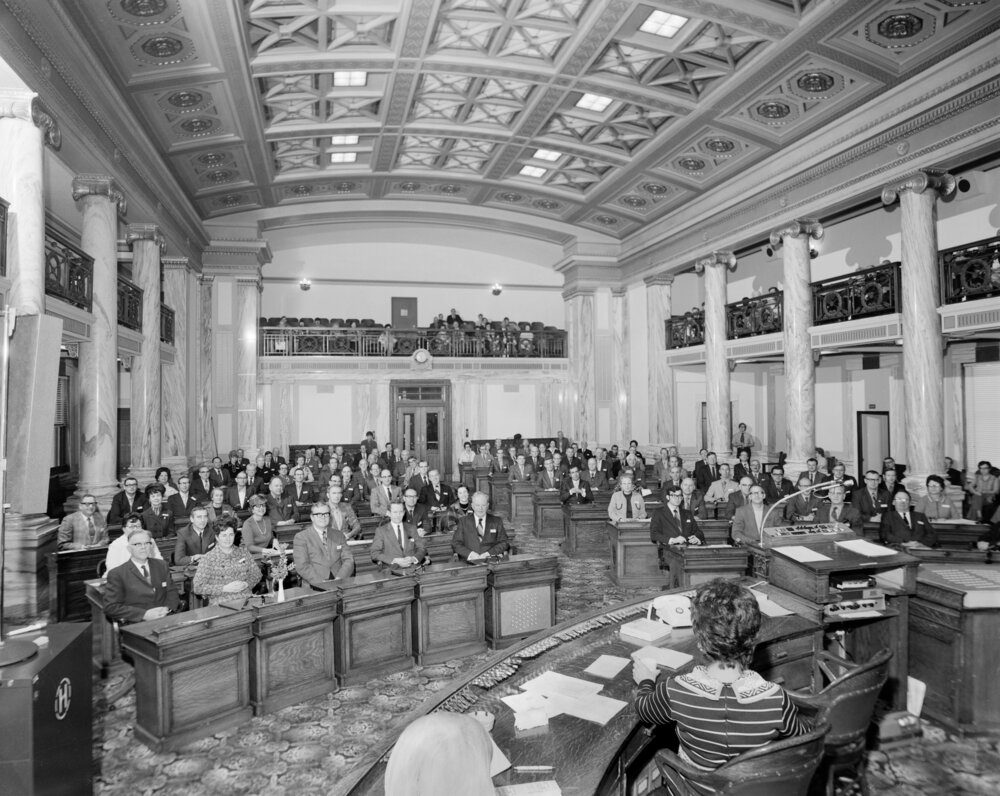 Montana joined the United States as the 41st state in 1889. The original state constitution, ratified in 1889, reflected the needs and values of a sparsely populated frontier state. The political turmoil of the 1960s, and a series of Montana environmental crises, made it clear that new governance was needed to manage a growing state in a new century. In 1972, the Montana Constitutional Convention met to take on the challenge. They authored a new constitution, and successfully steered it through to ratification, despite strong opposition. It was a landmark achievement, one that transformed state governance.

The basic structure of Montana government, with three branches (Executive, Legislature, and Judicial) was established in the original 1889 constitution. But it was not without problems. Official government business was conducted in private, with little to no public visibility. Big businesses exerted strong influence over policy and lawmaking. The legislature met for only 60 days every 2 years. Local governments and peoples often did not have the power needed to respond to challenges in their communities. And a 1964 US Supreme Court ruling dictated that all elected representatives must be allocated by population – not by county, as was enshrined in the 1889 constitution. This all proved problematic as the state grew, and population concentrated in larger cities and towns.

The people of Montana grew increasingly concerned about environmental issues. People from all walks of life felt a strong connection to the land, whether for farming, mining, ranching, or just recreational purposes. Two incidents brought the issue to a head. In 1971, Anaconda’s largest mine was taken over by the country of Chile, leading to massive financial losses and layoffs for Montanans. Not long after, a proposal was published by the Federal government – the North Central Power Study. This proposal concluded that a massive complex of power plants and mines in eastern Montana would be needed to supply power to the nation. If enacted, it threatened to turn the eastern part of the state into a wasteland. A groundswell of opposition rose, across the political spectrum.

The final factor influencing the drive for a new constitution was the nationwide movement for equality. The equality movement sweeping the nation cut across several dimensions – gender, race, and culture. The drive for equality spanned decades of work by women, African Americans, Native Americans, and other people marginalized by society. Montana’s large Native American population faced many challenges, and women were without many basic rights. The concept of equality flowed throughout the constitutional convention, and into the final ratified document.

In November 1971, 100 Montanans were elected to the Constitutional Convention. The old constitution forbade people from holding two public offices, so the Convention was mostly made up of ordinary citizens. It was a true melting pot, composed of Democrats and Republicans, with representation by women and Native Americans. They met for 2 months in Helena at the state capitol, conducting meetings in an open setting to allow the public to follow along. The end product addressed all of the issues consuming Montana and the nation, eloquently stated in the Preamble:

“We the people of Montana grateful to God for the quiet beauty of our state, the grandeur of our mountains, the vastness of our rolling plains, and desiring to improve the quality of life, equality of opportunity and to secure the blessings of liberty for this and future generations do ordain and establish this constitution.”

The new constitution contained a Declaration of Rights, 34 in total. These covered topics including equality, privacy, education, and bestowing power to the people. The Governor now held veto power over the legislature. The legislature itself could exist as a body for the entire tenure of its term to address issues - not just a short 60-day period. Environmental safeguards included water protections and a requirement to reclaim (or restore) land after use. The rights of Native Americans, women, even children were secured. “Right to know” provisions ensured that the public would have better visibility into Montana governance. Powers were granted to local government, including the new power to launch ballot initiatives and referendums. It was a transformative document that would reshape the future of Montana.

All 100 delegates signed the final version of the new constitution, but the path to formal ratification was rocky. Many Montanans opposed provisions of the constitution, particularly the environmental protections and the powers granted to the state government. The final step to ratification was a public vote, held on June 6, 1972. The vote was close and passed by a margin of only 2,532 votes. It was official – Montana had a new constitution. 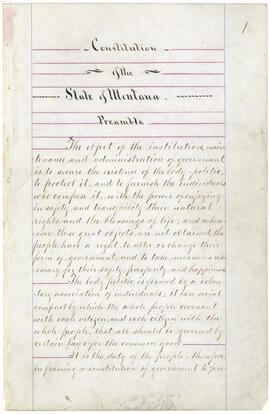 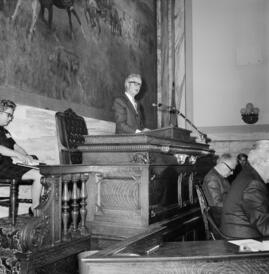 View of Governor Forrest Anderson speaking at the Constitutional Convention Opening Ceremony, on November 29, 1971, in the Montana House Chamber in the State Capitol building in Helena, Montana. 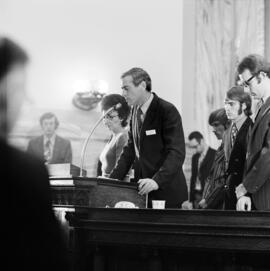 View of William A. Burkhardt praying at a meeting of the Montana Constitutional Convention, on January 17, 1972, in the Montana House Chamber in the State Capitol building in Helena, Montana. 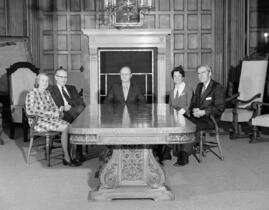 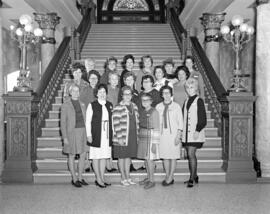 View of 19 women standing on a staircase in the Montana State Capitol building, Helena, Montana. These women were elected representatives to the Montana Constitutional Convention. 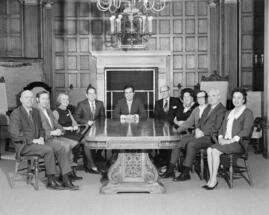 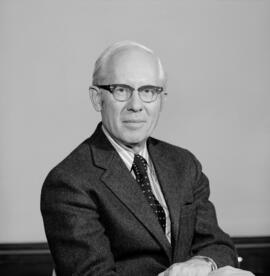 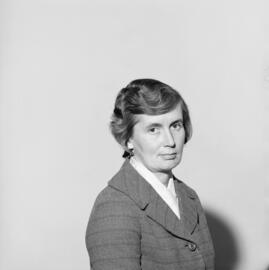 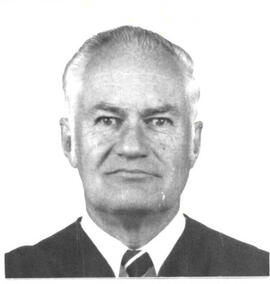 Photograph of Judge Charles Bertram (C.B.) McNeil. Served as Montana District Court Judge in the 20th Judicial District 1984-2013. Elected to the bench 1984. Born February 17, 1937 in Anaconda, Montana. Served as a pilot in the U.S. Army. Attended Montana School of Mines and received B. S. in Metallurgical Engineering, University of Alaska, J.D. University of Montana. Engaged in the general practice of law in Polson. Delegate, 1972 Montana Constitutional Convention. His wife's name is JoAnn and they are the parents of one son and one daughter. 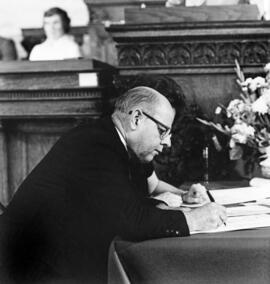